JD Rucker I assume most readers already know who has the logical narrative and who has the unhinged narrative between the left and the right. Those who attempt to cross the border illegally should not complain about tear gas.

Only those who want open borders can in any way justify condemning any non-lethal actions to prevent illegal border crossings.

Customs and Border Protection officials have suspended northbound and southbound vehicle and pedestrian crossings at the San Ysidro port of entry, officials told Fox News. Tear gas was being fired from the U. Children were screaming and coughing in the mayhem.

They are no longer in the nation that oppressed them.

Many claim to want to be Americans while waving the flag of the country they are calling their oppressors. Despite very tight shots focused on women and children, wider shots reveal these are mostly young adult males.

None of this jibes with the leftist narrative. Otherwise, we are not a sovereign nation. If you are triggered by the use of anything other than lethal force to prevent illegal border crossings, please acknowledge that you believe in OpenBorders and you don't agree the United States is a sovereign nation.

Otherwise, you're just unhinged. If they still want to come to America, they have the option of doing it the right way and waiting like everyone else. Those who follow the rules, work through the system, and enter the country legally are exponentially more likely to be productive and respectful of our laws.Tonight, President Bush Will Call On Congress To Pass Comprehensive Immigration Reform.

The President believes that America can simultaneously be a lawful, economically dynamic, and welcoming society. We must address the problem of illegal immigration and deliver a system that is secure, productive.

The issue of what to do about the 50, and rising flood of illegal immigrant children has both parties pointing fingers. But are the problems associated with illegal immigrants the fault of former President George W. 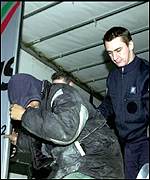 Bush and not President Obama due to a bill signed into law in ? George W. Bush on Immigration; Political pundits. President of the United States, Former Republican Governor (TX) Illegal immigration is complicated, but it can be resolved.

And it must be resolved in a way that upholds both our laws and our highest ideals. Can Bush be so haplessly naive as to think there is not a reasonable probability that Mexican trucks crossing the U.S.

Mexico border, unchecked, will not be carrying drugs, illegal alien, terrorist, al Qaeda, weapons of mass destruction or any other type of contraband that could fit in the back of a semi-trailer. The collapse in illegal immigrants entering the United States explains much of the stabilization but perhaps President Obama doesn’t deserve any credit for that.